Over the past many years, a lot has happened in my world....a lot of it quite heart-wrenching and full of hurt.  Some of these things were minor slights.  Others were quite horrible things that make me thank the good Lord for his steadfast love and protection.  I am actually thankful for all of these things as they have provided the opportunity for me to grow closer to the Lord and mature as a Christian.

Still, with so many things being perpetuated against me, the opportunity for bitterness, anger and unforgiveness arose.  I wanted to forgive, but it was difficult to simply relieve those who had done these miserable acts of responsibility.  To clear the slate and forget how they had injured me seemed like adding insult to injury.  To resolve to trust them again and to feel ready to do so seemed unreasonable.  To say, as we are so often do when someone apologizes to us, "It's okay" when really and truly, it was NOT okay.  If someone cuts off your finger and then apologizes, it still isn't okay....ever.  Based upon my understanding of what forgiveness entailed, forgiveness was hard.  But holding onto bitterness, anger and unforgiveness, we know is like drinking poison and hoping another person will die.  I felt trapped.  Have you ever felt that way?

And then, a trusted adviser shared an article with me on what forgiveness is...and what it is not.  You can read it here (I suggest you print it out and post it on a wall where you'll see it regularly!):

Forgiveness -What It Is and What It Isn't - Laura Petherbridge

Were you surprised to learn that granting forgiveness looks nothing like what I've described above?  To forgive, you need not pretend nothing happened nor do you have to agree with what was done.  It did happen and it wasn't right.  You're not tasked with trusting the person who hurt you again.  You may at some point, but that will require some evidence that the offender is worthy of your trust.  In my most poignant situation, I am still waiting for this evidence.  Finally, forgiveness doesn't mean the person who hurt you isn't held accountable for their actions.  If a murder is committed, the person who committed such a horrible act still goes to jail even if the family of the victim forgives.

So, then, where does freedom come into this equation if the person who has hurt you isn't free of responsibility?  It seems a bit counter-intuitive, perhaps, but the one who is freed is you.  The pain may remain.  That is not where freedom is found.

Freedom is found in the Father's grace toward you.  If you are unable to forgive it produces separation from God, but this is not because God doesn't want to forgive you.  Jesus died on the cross for just this purpose....and to forgive that person who hurt you for hurting you as well.  And yet, if we choose not to forgive others (because it is a choice, dear friend), we essentially tell Jesus his sacrifice wasn't enough to cover that other person's sins....and the chasm of separation opens.

Remember that in God's eyes every sin - from the smallest "white" lie to murder, is all sin.  He doesn't distinguish.  One human is not more righteous than another because he/she isn't as bad as (fill in the blank).  No, we all are miserable offenders and not one of us can claim even a smidgen of salvation based upon the works of our own hands.

So the next time someone wrongs you, remember that you are in the same boat as that person. Choose to forgive.  This may be as simple as praying to yourself  (or out loud if you're alone and can do so),

Lord, I thank you for your grace.  I am humbled knowing that your grace covers me whenever I do something that hurts you or another one of your children.  Today,  I choose to forgive (insert offender's name) for (their offense).  I was really hurt by this and I'm not sure how I can trust them going forward.  Although I will hold him/her accountable for their actions, I trust you to dole out any additional consequences as you see fit to soften their heart and bring repentance.  Please protect my heart from bitterness and anger and help me to forgive not seven times by seventy time seven times should he/she hurt me again in the future.  I pray that we will both grow closer to you through this experience and will both find peace.  I ask all of this in Jesus' name.  Amen.

Whether you need to forgive one little thing or a lot of big things, I do hope you'll start working through them today.  Make a list and pray this prayer for each thing and then enjoy the blessing of God's peace knowing that as you have forgiven others, he has forgiven you also.

I have said these things to you, that in me you may have peace.  In the world, you will have tribulation.  But take heart; I have overcome the world.  ~ John 16:33
Being Lovely Biblical Truths Thinking Lovely

Popular posts from this blog 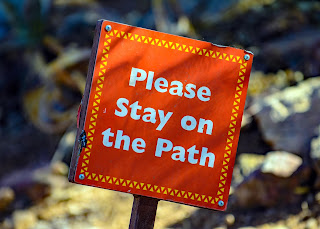 Joseph, her fiance, was a good man and did not want to disgrace her publicly, so he decided to break the engagement quietly. ~ Matthew 1:19 Imagine that you're a young man about to get married to a young woman.  In today's world, you can decide to get engaged or even "hitched" in a matter of minutes on a whim to anyone you want.  In Joseph and Mary's world, marriage was not entered into lightly.  First, the families talked and came to an agreement.  Then when the time was deemed right, a public announcement of your intention to marry was made.  At this point, you were engaged, but it wasn't like being engaged in our day.  If you were a young Jewish couple, being engaged meant that except in cases of death or divorce, you were committed to each other, but you were still not doing married people things.  Eventually, you would be married, but from my understanding (which is shallow, I'll admit, as my understanding is second-hand from Father McCloud's
Read more

What's in a Name? 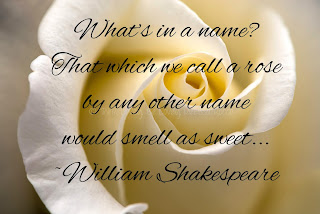 What’s in a name? that which we call a rose by any other name would smell as sweet...  ~  William Shakespeare's Romeo and Juliet Act II, Scene II Think lovely, be lovely...it seems simple enough, but there is an underlying meaning, a significance in my world.  It stems from what has become sort of a "life verse" for me...a theme for this stage (and the rest of my life) summed up in one cherished Bible verse: Finally, brothers, whatever is true, whatever is honorable, whatever is just, whatever is pure, whatever is lovely, whatever is commendable, if there is any excellence, if there is anything worthy of praise, think about these things.  Philippians 4:8 ESV This verse is in response to a tendency I had for most of my life (and that I still struggle with on occasion) to focus too much on what was wrong in my world instead of the blessings.  It reminds me that in the midst of many struggles throughout my life, I have grown, I have become strong and I have built an i
Read more